All News
In order to view all images, please register and log in. This will also allow you to comment on our stories and have the option to receive our email alerts. Click here to register
25.06.2021

What could possibly go wrong?

We have been sent a disturbing video of a truck crane trying to lift a large oil tanker that ends in disaster.

The video shows a small Kato truck crane mounted on a two axle Fuso chassis trying to lift an old oil tanker, somewhere in the Middle East. The crane is clearly too small for the job and right from the offset its front axles are lifted clear of the ground. The operator remains unfazed and does not give up but keeps on trying to bring it closer.

After struggling for a few moments a co worker is brave/stupid enough to move under the load and play the role of banksman, helping position the tanker in a more advantageous position to complete the lift. Somehow the operator eventually succeeds in raising the tanker and bringing it in closer - due to short radius at a considerable height. While he now has the load, he has no where to go with it, but over the side. Surprisingly the tough little crane manages it and proceeds to slew the load and, perhaps somewhat surprisingly, manages it. And amazingly the ground is firm enough to withstand the loads in spite of the absence of mats or cribbing.

At this point he makes a cardinal error, instead of lowering the load to the ground and repositioning the crane, he - either on purpose or with gravity taking over - slews over the front on a crane that most likely has no over the front chart. With the crane out of level the load radius increases and while the crane kept on going the chassis was another thing entirely and it ends as you might expect…

Have a safe weekend!

Red
I think the operator went to the Three Stooges Crane Academy, or the Benny Hill Hoisting and Rigging School.........

Eric_L
That was even better than I was expecting ! 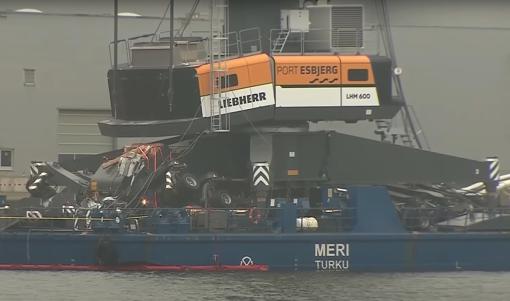