A large luffing jib tower crane dropped onto the top of the lift shaft of the building it was working on this morning in Melbourne, Australia, after something failed while it was being climbed and tower sections added.

The crane has remained upright and within the building, but its precarious position has caused the authorities to close the site and some surrounding roads. The Marco twin towers of the residential complex are due to rise to 36 and for stories, the main contractor is Crema Constructions.

Local reports says that a hydraulic jacking component - possibly a jack cylinder - gave way causing the crane superstructure to drop onto the top of the lift shaft. One of the six men carrying out the jacking operation was treated for minor leg injuries. The crane is owned and operated by I&D group.

That is all the information we have at the moment.

Hydraulic failure ?.... More like they'd just heard the cricket scores when it happened and took their minds of the job ! 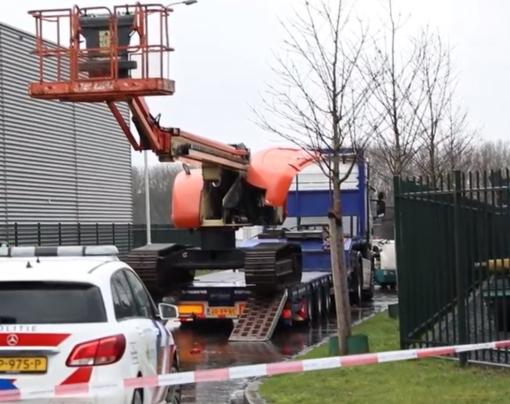 A man has died while loading a tracked boom lift in Wijchen, near Nijmegen, the Netherlands today.