All News
In order to view all images, please register and log in. This will also allow you to comment on our stories and have the option to receive our email alerts. Click here to register
14.08.2019

In an announcement issued this morning AFI says that it plans to retain and develop the well known Facelift brand, with managing director Paul Standing remaining with the business and joining the AFI board.

Facelift’s latest accounts show revenues of just over £12 million last year, some way below its peak years. In the 2018 Cranes & Access Top 30 UK/Ireland rental companies it was listed 16th with a fleet 757 units operating from six locations with 125 employees.

Facelift was established by founder and current shareholder Gordon Leicester in 1985 when he was just 20 years old, with a second hand truck mounted lift he acquired from the Hong Kong Fire Service. He registered the present company in 1986 and acquired his second machine - a 21 metre Acklift truck mount - the same year. Leicester sold a minority stake in the business to local investors a few years back, and more recently lost overall control of the company and has not played an active role this year.

Alongside the acquisition AFI has also secured £60 million of new long term debt type financing from Pricoa, while the senior management team has bought out its majority investor private equity firm Rutland Partners, which acquired a 51 percent stake in the AFI business in 2013 at the same time as AFI acquired Hi-Reach and Access Rental Gulf.
As part of the this transaction the ownership of the business reverts to the management team, led by David McNicholas and chairman David Shipman who are taking a "significant majority stake" in the business. The addition of Facelift to the group takes revenues to more than £100 million with a rental fleet of 7,500 machines.

Facelift has been a major player in the development of the UK powered access market over the years, playing a particularly significant role in the truck mounted and underbridge sectors.
Please register to see all images

The company was also a true pioneer, being the first in the UK to purchase a Bronto Skylift truck mounted lift, one of the first companies to take on spider and trailer/atrium lifts, becoming the Denka dealer for a time, and developed the first platform on a Unimog chassis when it mounted an Omme boom lift on one. This was such an innovation at the time that it appeared on the TV programme Tomorrow's World. It also claims to have been the first to offer self-drive truck mounted work platforms in the UK. It only entered the mainstream self-propelled platform market sometime later, adding its first scissor lifts in 2005.
Please register to see all images

An Omme boom lift mounted on a Unimog chassis

More recently Leicester has devoted a good deal of his time to other related projects, such as the development of a unique built in harness system - ZT - that avoids the risk of suspension trauma and a patented folding outrigger mat. He was also the main instigator of a number of safety related campaigns such as IPAF’s Clunk Click campaign to make the wearing of harnesses and short lanyards in boom lifts a given.
Please register to see all images

This deal has been on the cards for some time, and the fact that talks were ongoing is no surprise. It almost certainly has the potential to be a good deal for all concerned. The relationship between the major shareholders has not been good for some time. Founder Gordon Leicester also diluted his focus a few years back into associated ventures that have not exactly been raging financial successes, and at best could be accused of being a distraction from his core business. These have included the ZT harness - built into a pair of work trousers to avoid the risk of suspension trauma - and the involvement with Ascendant and Redwood Engineering.

The move secures the company’s ownership, finances and future, while maintaining what is a very strong brand - brand building was/is one of Leicester’s greatest strengths. At the same time AFI extends its coverage and gains some excellent new employees. All at a time when the management has regained majority ownership of the group.

Exciting times for all involved.

Sherm
The photo of Gordon directing traffic has a SAAB 900 four-door sedan. I droves three SAABs during 17 years of ownership and hated to see the company bite the dust.

Dicky p
Fantastic news congratulations to DS and DM
Even when the market is slow and unpredictable AFI step up to the plate I’m sure this will help them take on loxam and the rest of the competition. 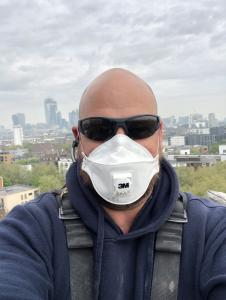 Mr X
Well, what a shocker, no one saw that coming????????‍♂️, thought I’d of retired before that story finally broke cover.

Oz based safety advisor for IPAF

IPAF has appointed Mike Ashton as international safety & technical advisor, based in Australia