Near miss caught on camera

The following letter was received yesterday evening from Cathal McNally of Forsyth of Denny regarding a serious incident in the company’s yard earlier this week, which was caught on the CCTV cameras.

Thankfully no one was hurt but by highlighting and sharing the incident, not only will the company itself benefit, but so will others. Finally it is refreshing to see such a positive and open attitude. The industry would be so much safer if more companies would follow the lead set by Cathal McNally and his team, rather than adopt precisely the opposite policy. We salute him and the company.

The letter is published in full below and the video footage follows it.

I would like to highlight a serious incident that occurred in our own yard earlier this week, the attached video refers to it and although the quality is poor, it serves to demonstrate how close we came to losing one of our work colleagues as a result.

I appreciate it is uncommon for crane owners to publish their negative news or anything they deem may have a negative effect on their business. All of us publish the positives - stories of new machinery added to the fleet, stories of new depots opened, stories of self-praise, ‘Another Happy Customer’, team this and team that. However, do ANY of us learn anything from this type of news?

The reason we are publishing this, is in the hope that someone, somewhere might learn from it. I believe all crane companies should publish their incidents and near misses and not attempt to cover them up - there is no shame in admitting your failings - if these type of occurrences can be eliminated or a life can be saved, it can only be a positive thing for the whole industry. Of course, some will ‘scoff’ but shouldn’t, because this type of occurrence is out there waiting on us all.

Briefly describing the incident, one of our operators (with over 30 years crane and lifting experience), needed to add oil to the engine of a Liebherr LTM1040. To do this, the ballast normally carried on the deck during road travel needs to be ‘lifted’ or mounted on the rear of the superstructure, thus allowing the engine covers to be removed to allow access to the engine.

The operator decided to carry out this procedure ‘Free On Wheels’ despite full Liebherr Training & Crane Mobilisation RA/MS for fully rigged duties being in place. We can see from earlier footage that the superstructure was rotated to 180 degrees over the rear with the boom angle quite low. Once over the rear, the boom was raised to a higher angle, the ballast was lifted, and the crane was slewed, resulting in an overturn backwards.

In our family, we have always said, that ‘Nothing is a problem if money can fix it’. There is considerable damage to the crane itself and indeed, the crane (60t) that it collided with. However, it was only when we viewed the footage of the incident that we realised how serious it was - one of our colleagues who was innocently washing the 60t, just passed the stricken crane as it overturned. We estimate if he had paused alongside the 60t he was washing about five seconds earlier, he would surely have been pinned underneath the overturning crane OR, had he been on the other side of the 60t, he could have been injured as it was pushed forward or struck by the swinging hook block.

Following full investigation, we held a safety stand-down this evening in our yard and got all staff involved, showing them this video and discussing what it would have been like to recover the crane had someone been pinned under it - it was and IS clear to be seen how close we came to losing a work colleague and I can assure you - it was a very sobering moment for us all. 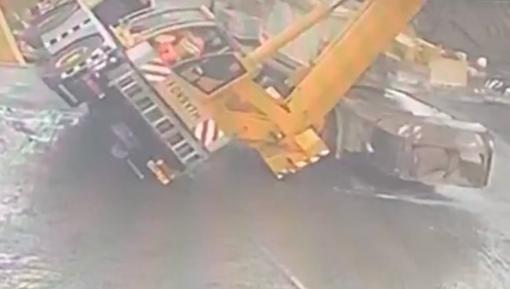 A serious near miss

whothistime
For expert read exburk , who can't handle the real world of cranes and lifting . The issue is that the skilbase is shrinking at an alarming rate . Due to poor pay for the amount of responsibility that operators , crane supervisors have to take on . This is mainly down to rate slashing companies who drive the rates down be it low rates or cash back incentives if you spend enough money the a certain company. Rates need to rise to enable the better smaller companies to pay a better rate to personal on the ground and therefore encourage new entrants into the industry to be able to gain experience from the old heads before they are all gone

Daveliftsitbetter!!
Dear Mike,
please can you answer the following before I can take what you are saying seriously;

whothistime
Just shows how little so called experts know , comments of having to lift off ballast to check engine oil is b______t ,dipstick and oil filler are accessible without removing ballast.

Red
To all those who gave a thumbs down to my earlier comment, I ask you this; the next time you are driving a crane down a busy expressway and engine trouble arises, you don't mind pulling over to the shoulder, extending and setting the outriggers raising the boom and lifting the counterweights off the deck just to access the engine to find the trouble !?

FYI only, having researched 717 Crane and Lifting Incidents Worldwide over the past 13yrs causing 572 Fatalities. The quantity of mobile cranes involved was 278 or 39% of which
256 of these potentially fatal incidents was caused by poor outrigger set up, where short rigging is the biggest single cause off crane incidents ( Variobase excluded) as it leaves the Crane Unstable on the short Rigged side.
Gravity does the rest as depicted in your CCTV footage.

That is precisely why all Training Programmes should now include How to Calculate the Effects of Force, Mass and Gravity. Because to ignore these forces is to court disaster, as evidenced by your CCTV footage.

Why we should do this is because the Corporate Manslaughter and Corporate Homicide Act has now changed the Legal Landscape for all Employers in the UK.
As Worker Safety is important, very important and much too important to leave it to chance. Because 572 Fatal Incidents is 572 too many, leaving thousands of bereaved family members behind ?

tackb
I know Cathal Mcnally and he is an example to many with his open and frank attitude towards incidents like this , a lesson could be learnt by many in the industry !

I see Mr Ponsonby is doing his usual nonsense , when is this bad smell going to go away ? He adds nothing of any use , isn't an AP or in fact someone with any real world experience of cranes yet he keeps piping up with frankly unpleasant letters to people who are already doing something. Operate some cranes for a few years mike work at the coal face so to speak for a few years , mix with the guys that are doing this day in day out , then and only then will you be even remotely qualified to send these unhelpful letters. I put it to you though that you wouldn't last a fortnight if you actually had to do the job you claim to be such an expert on.

what are you actually doing to improve safety in the crane industry? if your efforts only stretch to pasting and coping the same thing on this website then I don't think you are doing much.
while this accident could have been avoided, it can be used as a learning point for many operators that do not change the working code on the crane each time they change the configuration.
without being rude Mr. P. can I ask how long you have worked in the crane/lifting industry?

Tmayes
“To try and make capital out of the misfortune of others
is shameful.”

Says the plastic lawyer that copies and pastes stuff all the time and preaches something that they have zero experience with. Personally cathel is doing why more for worker safety here than you have done ever but still chose to preach your rubbish to him.

Midnight Maty
Hats off to you Cathal, look forward to seeing you in Cambridge and Brighton when the sun comes out...

717 Crane and Lifting Incidents Worldwide causing
572 Fatalities, yet you think this is a subject for hilarity.

To try and make capital out of the misfortune of others
is shameful. Therefore you and Mr Wood should both
be thoroughly ashamed of yourselves.

Worker Safety is important, very important and much
too important to leave it to chance. Why because
572 Fatal Incidents is 572 too many ?

Millers
Had the SLI been programmed correctly this would not have occurred. Well done on sharing though. Main thing is no one got hurt.

Tmayes
A statement clearly from somebody that has no clue about operating cranes what so ever.

“Your Crane was tipped to the right by Gravity and thats why all Training Programmes should include How to calculate Force, Mass and Gravity because all Operators need to be able to calculate these forces in advance to avoid such incidents in the future.”

Thank you for having the courage of your convictions in publishing this CCTV footage all of which had the potential to be Fatal for the Man on the right steam cleaning his Crane.

As you know I have researched and recorded 717 Crane and Lifting Incidents Worldwide since Monday 7 May 2007 all of which has led to 572 Fatalities with 61 in the UK alone. My motivation is Worker Safety, nothing else and anyone who says otherwise is ill informed about the facts and should be challenged.

My 13yr database details Make, Model and Type of Crane plus Wind Turbine Location and all other Operational Factors such as Short-Rigged, LMI Override and Rigging.

Your Crane was tipped to the right by Gravity and thats why all Training Programmes should include How to calculate Force, Mass and Gravity because all Operators need to be able to calculate these forces in advance to avoid such incidents in the future.

This near miss incident should now be reported to HSE via the RIDDOR procedure as it maybe a precursor to something more significant in the future.

So well done for sharing your CCTV footage, very well done as Secrecy is the Enemy of Safety.

Happy to share my database results with you and all your staff, just say where and when ?

Red
I have always thought Liebherr to be well designed and well built, "state of the art". But having to move counterweights to access the engine for service just doesn't make sense.

the mooch
Has mobile crane services commented on how they would never make this mistake because they meticulously plan all their lifting operations so carefully?

Tmayes
Glad to see it was just metal and pride that was damaged, and the way they have been honest about the accident clearly to educate and help to avoid this sort of incident in the future shows what a great boss Mr McNally is, hopefully all companies will do the same in the future.

Crane lads
Glad it was only a couple of crane's damaged and people walked away. Thanks to the company for sharing this.

HLsup.
LML program on "outriggers out" while slewing on tires with CW and boom too far up...?

Manitowoc - “tariffs may not be the best solution”