The new crane features a 72KW electric motor and required control system, alongside the standard six cylinder diesel engine. The two power units use the same hydraulic pumps and the operator can switch between diesel and electric power for crane functions. Once on site, it ideally plugs into a 125 Amp mains power supply to fully match the performance of the diesel, but it also operates well enough on a 63 Amp supply. Alternatively, it can be plugged into a standalone remote battery pack.

Simplistically, all that is required to convert the standard machine to the E version is the installation of the electric motor module, plus the transfer gear that fits between the transmission and existing pumps. The electric version of the LTC 1050-3.1 features the 36 metre telematic boom, rather than the new shorter cable extended boom. Options include the RemoteDrive system to operate the chassis and the elevating cab.

Technical director Ulrich Hamme said: “We want to be able to offer our customers full crane performance even with the alternative electric power unit. The LTC 1050-3.1 still has a conventional internal combustion engine, powered by diesel or HVO, for driving on roads and for crane operations. However, as an alternative it also has an electric power unit for crane operations so that it generates Zero emissions. That means that all the familiar usage properties of the crane will be retained, regardless of whether the crane operations are powered by its zero emission electric motor or its internal combustion engine.”

In some respects, this is a Liebherr response to the Tadano/Demag E-Pack electric power pack, however, if the job site has a decent three phase power source the Liebherr needs no external pack. Even if the battery pack is employed it is just that - a simple battery pack - and thus only requires an electric cable to connect to the crane.
Depending on the price, this could become a popular option for this crane. 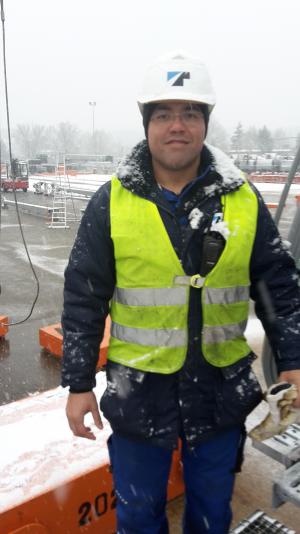 Raffy
I am wondering where they would find a 125A power source in the real world.

Manitou Deutschland has opened its new premises in Friedrichsdorf, on the north side of Frankfurt